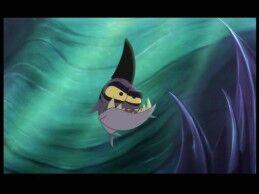 Undertow is Morgana's gigantic tiger shark who loves intimidating others with his size. He is voiced by Clancy Brown.

The Little Mermaid II: Return to the Sea

Undertow is summoned by Morgana and use him as a threat by threatening to feed baby Melody if Triton doesn't hand over the trident. Morgana's plan to kill Melody is foiled by Ariel, Eric, and King Triton. King Triton turns Undertow into a mini-fish resembling a piranha. Undertow complains to Triton about this, but Triton has no intention of returning him to normal, so he leaves with Morgana and her two manta rays, Cloak and Dagger.

At Morgana's lair, Morgana's attempts to turn Undertow back into his old self fail. After Morgana believes she can handle the trident, Undertow bets that Ursula could have done it. Morgana throws a small glass ball at Undertow (but she misses) for criticizing her, tells him all about her mother criticizing her. Undertow argues with Morgana about whose fault was what about how they all (including Cloak and Dagger) ended up hiding in the icy lair. The argument ends with the orb shining and Morgana sees her time for revenge has finally come.

Undertow, Cloak and Dagger lure Melody to Morgana's lair (much like Flotsam and Jetsam did to Ariel in the first film). Undertow introduces Melody to the "one and only" Morgana. Before Melody is transformed into a mermaid using a potion Ursula had made, Undertow complains about how he could have been changed into a huge shark with it. Morgana calms Undertow by saying "Keep your scales on, small fry. I'm still reeling her in."

Undertow appears again when Morgana reveals the spell is temporary and she tricks Melody into going to get Triton's trident for her.

Undertow scares Melody's friends, Tip and Dash away. Then Undertow takes Melody to Morgana's lair. After Undertow tries to rush Melody to give the trident to Morgana, Morgana silences him by snatching him with her tentacle. After Flounder (Ariel's fish friend) is accidentally called "Flopper" by Morgana, Flounder corrects her and attempts to attack Morgana but Morgana releases Undertow to attack Flounder. Undertow and Flounder fight. Melody is angry with Ariel for keeping the secret of the locket from her, so she gives the trident to Morgana. Melody soon realizes her mistake as Morgana's true colors show after she confesses.

Undertow is chased by Sebastian for taunting Triton. However, Undertow is returned to a bigger-than-before tiger shark by Morgana, using the trident. Sebastian escapes, safely, as Undertow gloats.

Undertow finds Tip and Dash trying to save Melody. Dash uses Tip as bait to save Melody, and Undertow swallows Tip alive, however Undertow is going so fast and out of control that he accidentally breaks the ice of Melody's prison and crashes into the wall opposite of it. Undertow's teeth all fall out and he is defeated. Tip is freed and Dash and Tip save Melody. It is unknown whether Undertow got killed or not, but sharks can grow new teeth when their old ones fall out, so, therefore, it is possible that Undertow did survive. However, Morgana's palace collapsed and it is possible that Undertow was crushed by the giant ice with Cloak and Dagger.