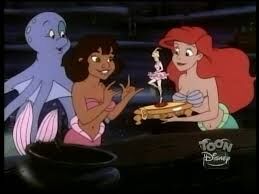 Ollie is a character from The Little Mermaid animated series.

Ollie is a blue vocal octopus who appears in two episodes: "Wish Upon A Starfish" and "Ariel's Treasures". He is the close friend and interpreter of Gabriella, a mute mermaid. He has spots on the sides of his head and a patch on his left eye. In his first appearance, he is shown with Gabriella, watching Ariel sing. After Ariel notices them, he explains Gabriella's disability and introduces himself. He is also the one to tell the tale of the Magical Wishing Starfish, and he accompanies them along the way. In his second appearance, he is visiting Atlantica with Gabriella and helps her stop Ursula's plot to take over the kingdom.