Max is an Old English Sheepdog and Prince Eric's pet. Unlike all the other animals in the film, Max is minimally anthropomorphic and does not speak in the human language. Max's barking and growling is provided by Frank Welker throughout his animated incarnations.

Max is taken along on Prince Eric's ship at the start of the movie. During Eric's birthday celebration, Max catches Ariel's fishy scent and starts sniffing around the deck to find her. From her spying place, Ariel can see Max coming toward her. She gasps in fright and quickly hides away from the window she's looking through. After a moment, Ariel peers back with a curious expression to see if the coast is clear, only to find a grinning Max panting in her face. Immediately taking a liking to the spunky mermaid, the dog gives her a sloppy lick on the cheek before bounding off to his master. Ariel watches his leave with a look of astonishment on her face before she smiles and touches her cheek dreamily. Ariel later comments on Eric "He's very handsome, isn't he?" Scuttle mistakenly believes Ariel to be speaking of Max and replies "I dunno, he looks kinda hairy and slobbery to me!"

When the a storm hits and the ship catches fire, the sailors escape safely, but Max is left behind. Seeing this, Eric dives out of his lifeboat and climbs back on board, grabbing Max and tossing him to safety. Later, when Eric is brought to shore safely by Ariel, Max smells out his master and rushes out to greet him. Max is also able to smell Ariel who is hidden off-shore behind rocks, but Eric does not understand his barking.

Later, Eric is walking Max out on the beach. Max smells the now human Ariel further on down the beach and excitedly runs away from Eric. He comes and playfully chases a frightened Ariel up a rock, joyfully licking her face once more. Ariel wipes her cheek and grins at Max, realizing the dog means her no harm. When Eric arrives, Max gets frusturated when his master doesn't realize that Ariel is the same girl who saved his life.

Two days later, Ursula herself appears in the guise of a human girl to distract Eric from kissing Ariel before the third day is up. Max can see Vanessa for what she really is and is seen growling at her, and during a sequence where animals try to stop the wedding, Max bites her in her rear end, causing her to release the shell containing Ariel's voice.

Max makes a few brief appearances in the prequel television series and the direct-to-video sequel, and is the only named character of the original film (other than Vanessa) who does not appear in the 2007 stage musical. 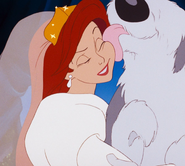