Almost completely underwater, Atlantica is a rocky world with immense holes on its surface. Beneath the surface is an entire world full of fish, merfolk, and other aquatic species that make up King Triton's underwater kingdom. The Heartless that appear in Atlantica are unique to it, such as Sea Neons which resemble jellyfish. In all games, the boss of Atlantica is Ursula (occasionally accompanied by Flotsam and Jetsam).

King Triton is the ruler of this world, and its Keyhole is hidden in Ariel's grotto.

Sora, Donald and Goofy arrive in Atlantica, with Donald using magic to alter their forms into those of undersea folk. They are soon encountered by Ariel, Flounder, and Sebastian, who help them get used to swimming about, despite Sebastian and Flounder's misgivings about the group. After Sora and company fend off a Heartless attack, Ariel asks them to accompany her and her friends to the palace, where they meet King Triton. Triton dispatches more Heartless with his trident and scolds Ariel for venturing outside the palace, and when Goofy mentions the group's search for the Keyhole, he angrily denies its existence. Ariel retreats to her grotto, accompanied by Sora and company. Triton and Sebastian briefly discuss the Heartless, and Sebastian reports that they seem to be coming from Ursula's lair.

In the grotto, Ariel tells the others about her interest in the surface world, and she proposes they search for the Keyhole. Followed from a distance by Sebastian, they explore the Sunken Ship, where they find a Crystal Trident resembling an indentation in Ariel's grotto, and they head back, fighting past the Shark on the way. At the grotto, Sora places the crystal into the indentation, but Triton arrives and, furious at Ariel's disobedience and upon seeing the crystal, destroys it. Crushed, Ariel leaves the grotto, and Triton confronts Sora about being from another world, declaring the Keyblade and its bearer as bringing ruin to worlds, and he tells him to leave the kingdom.

Meanwhile, Ariel is approached by Ursula, who promises to help her reach other worlds in exchange for her letting Ursula into the palace, so that she can find the Keyhole. Once inside, she steals Triton's trident and overpowers him; however, the Keyhole is not in the palace, and Ursula flees when Sora, Donald, and Goofy arrive. Triton asks the three to go after her and retrieve the trident, and Ariel and Sebastian accompany them in pursuit of Ursula. Near the Sunken Ship, Sebastian opens the path to Ursula's lair. The group confronts Ursula and her minions, Flotsam and Jetsam, in the lair, and they defeat them in battle, destroying the two eels in the process. Ursula retreats into the open ocean, where she uses the trident to grow to a tremendous size. Sora and company follow, and after a drawn-out battle, they finally triumph over her.

They retrieve the trident and return it to Triton, who apologizes for driving Ariel to helping Ursula and reveals that the crystal that was destroyed would have revealed the Keyhole in Ariel's grotto. He lends Ariel his trident so she can reveal the Keyhole and requests that Sora seal it. After it is sealed, Sora apologizes to Ariel for not telling her about being from another world, but she forgives him, expressing her wish to visit other worlds herself someday.

In Castle Oblivion, Sora, Donald, and Goofy use one of the World Cards to enter a fascimile of Atlantica based on their memories. They encounter Ariel, who has stolen Triton's trident from the palace. After speaking with Sebastian at the palace, they follow Ariel to her grotto and discover that Ursula has promised to reunite her with Flounder, who Ursula claims is trapped in the human world. Sora and the others agree to accompany Ariel to confront Ursula and discover the truth about what happened to Flounder.

When they arrive at Ursula's lair, however, Ursula reveals that she captured Flounder herself and demands the trident in exchange for his freedom. Ariel reluctantly turns it over to her, and although she releases Flounder as promised, she uses the trident to grow to giant size and attacks. Sora successfully defeats her, however, and Ariel recovers the trident, deciding to tell the truth when she returns it to her father.

Later, Riku also enters a memory-based Atlantica in one of Casle Oblivion's basements, but he only encounters Ursula, who he defeats in battle.

One night after a storm, Ariel swims up to the surface and finds Prince Eric, floating unconscious on a piece of wreckage, and brings him to shore. Infatuated by him, she sings to him, but disappears into the sea when he begins to stir, leaving him to wonder about the girl who saved him.

Once Sora, Donald and Goofy arrive back in Atlantica, they reunite with Ariel, Sebastian and Flounder, who help Sora refresh his swimming skills. Sebastian tells the group about the concert he is planning and asks them to participate, in order to preoccupy Ariel and cheer her up. After Sora and the others learns the basics, they all perform a song together. King Triton comes by, and he tells Sora he hopes rehearsing for the concert will take Ariel's mind off the human world. When Ariel is still unable to focus on rehearsals, however, Flounder suggests they give her a statue of Eric that had sunk from his wrecked ship.

They bring the statue to Ariel's grotto, to her delight. She sings about her fascination with life on the surface, and Sora promises to help her. In the meantime, Sebastian writes a new song, which celebrates life under the sea, and challenges Sora to learn it. They perform the new song, but Ariel tells Sebastian she wants to sing about harmony between the surface and the world beneath, much to his dismay. Ariel threatens not to participate in the musical and storms off, and Sebastian laments that she has fallen in love with a human, which Triton overhears. On the surface, Ariel brings Sora and the others to the beach, where Eric has been looking for the girl who saved him. They see Eric lose a pendant in the surf, and it lodges under some rocks.

Ariel is excited when they retrieve the pendant, planning to return it to Eric. However, Triton confronts her, and despite her attempts to reason with him, he destroys Eric's statue. Ariel flees, devastated, and she is approached by Ursula, who offers to turn her into a human for three days in exchange for Ariel's voice. If Ariel can get Eric to kiss her before the three days are up, she will remain human; otherwise, she will return to her mermaid form and belong to Ursula. Sora and the others arrive too late to prevent Ariel from signing Ursula's contract, and they are unable to stop Ursula's magic. They help the now-human Ariel to the surface, and she is found on the beach by Eric. Although she is unable to speak, she returns his pendant, and he takes her into his home.

Over the next few days, Sebastian and Flounder keep an eye on Ariel, while Sora and the others try to find Ursula, to no avail. On the night of the second day, Ariel and Eric nearly kiss, but Flotsam and Jetsam interfere. On the last day, with still no sign of Ursula, Sora, Donald, and Goofy return to the beach to see Ariel in tears and Eric walking with a black-haired girl, who sings in Ariel's voice. Flounder recognizes the girl's necklace as belonging to Ursula and concludes that she is Ursula in disguise. Sora uses a beam of light from the Keyblade to knock away and destroy the necklace, restoring Ariel's voice and freeing Eric from Ursula's influence. Eric realizes that Ariel is the girl who saved him, but the sun is already setting, and Ursula, back in her true form, takes Ariel back to the sea, with Sora and company in pursuit.

Back underwater, Triton confronts Ursula and offers himself in Ariel's place, putting his name on Ariel's contract. Ursula transforms Triton into a polyp and takes his trident. She threatens Triton, but Eric, who followed Ariel underwater, grazes her arm with a harpoon. Enraged, Ursula sends Flotsam and Jetsam after him and uses the trident to grow to giant size. During the ensuing battle, Sora manages to destroy the two eels, then knocks the trident from Ursula's hand. Eric throws the trident, piercing Ursula and destroying her. After the battle, Ariel sadly shows Eric her mermaid form, but Eric reaffirms his love, and they embrace.

Later, while Ariel and Eric continue seeing each other, with Triton's support, Sebastian continues planning the musical. In order to make it the best ever, he asks Sora for his help with an idea he has. In the end, the concert features a song celebrating Ariel and Eric's love and peace between above and below the surface. After the concert, Sora opens a Gate with the Keyblade, but before they leave, Sora, Donald, and Goofy sing a goodbye song, saying that they will meet again.

Sometime after the defeat of Xemnas, Ariel has become fully human, and she and Eric are on their wedding cruise, waving to King Triton, Sebastian, and Flounder. 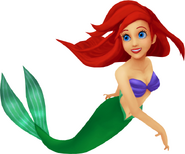 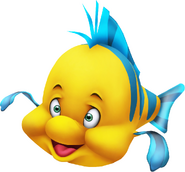 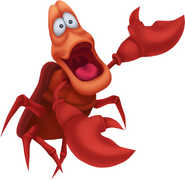 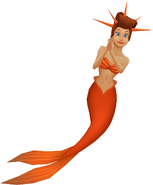 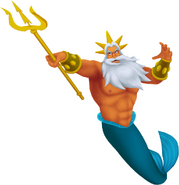 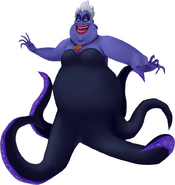 Ursula
Add a photo to this gallery

Kingdom Hearts I Atlantica dialogue
Add a photo to this gallery