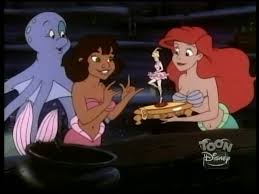 Gabriella is a character from The Little Mermaid animated series.

In her first appearance, before she meets Ariel, she sees her singing the first part of a song called "Daring To Dance" and sees her twirling about a music with a figure of a ballerina on top of it. Ariel stops abruptly upon seeing her, but Gabriella encourages her to continue. She wishes to be able to sing as beautifully as Ariel, and she identifies with Ariel's desire to dance. She decides to journey with Ariel to visit the Magical Wishing Starfish, passing through many dangers along the way. She is saddened when the Magical Wishing Starfish proves to be a fraud, but Ariel reassures her that she can express her feelings just as well through sign language.

She joins Ariel in the second part of "Daring to Dance".

In her second appearance, she returns to Atlantica for a visit. She and Ariel gush over Ariel's new additions to her collection of human objects, as well as the music box that Ariel found when they first met. Unbeknownst to either of them, Ursula has launched another scheme to take over Atlantica, this time casting a spell that causes Ariel's treasures to come to life and terrorize people. She is confused and shocked when the treasures come alive, but she works with Ariel to break Ursula's spell.

Gabrielle is a deaf-mute Latina mermaid who dreams of becoming a singer. Gabriella's sign language is translated by her octopus friend Ollie (who is voiced by Gabriel Damon). This character is based on a real person who was a fan of the show and died during its first season.