The Little Mermaid
Register
Don't have an account?
Sign In
Advertisement
in: Characters, Main Characters, Book Characters,
and 5 more

Prince Eric is the protagonist of Disney's 1989 feature film The Little Mermaid, its television series, and the tetratagonist of its sequel. The character is based on the "prince" character of Hans Christian Andersen's story "The Little Mermaid" but adapted by writer Roger Allers for Disney's film. The character is voiced by Christopher Daniel Barnes in the original film and the Kingdom Hearts video games, by Jeff Bennett in the prequel television series, and by Rob Paulsen in the direct-to-video sequel. In the 2007 Broadway musical version, the role was originated by Sean Palmer.

Despite being royalty, Eric is an accomplished mariner who is often seen partaking in various duties aboard ships in his own fleet, embelmatic of being a merchant prince. Eric is also displayed to be a skilled helmsman as he is seen steering ships in both the 1989 film and its sequel, the former his skill displayed where he skewers through Ursula in a split second hard turn to port in a derelict ship. He is often out at sea going on voyages ranging from a fishing expedition to battles at sea. He is often accompanied by Grimsby, his servant and personal confidant.

Allegedly according to a page of the film's 1997 official novelization by A.L. Singer, Eric is eighteen in the film, two years older than Ariel, who is sixteen at the time of the film.

Through dialogue between him and his man-servant Grimsby, it is revealed that the kingdom is eagerly awaiting the day that Eric marries. Eric has turned down at least one princess as a prospective bride, claiming that he is still looking for the right girl. When a storm hits, everyone manages to escape to the lifeboat except for Eric, who swims back to save his dog, Max. In the process, he almost drowns, but he is saved by Ariel. She drags him to shore and sings to him, but before he can regain consciousness fully, Max and Grimsby arrive, forcing Ariel to dive underwater.

When Eric is seen on-film again, he is haunted by Ariel's voice, and has been searching the kingdom for her. When he crosses paths with Ariel again, she has traded her voice for legs, and though he initially finds her familiar, her lack of a voice makes him think that she cannot be the girl who rescued him. However, he brings her back to his palace and they spend time together. After some advice from Grimsby, Eric takes Ariel on a tour of his kingdom. That evening, the two go on a boat ride in which Sebastian leads a group of animals in a chorus of "Kiss The Girl", in an attempt to get Eric to fall in love with Ariel and kiss her, so that she can remain human. The two come close to kissing, but Ursula the sea witch's eels, Flotsam and Jetsam intervene by tipping over their boat. Later on, Grimsby advises Eric to forget about his "dream girl", and focus on the one "warm, caring, and right before his eyes". He apparently does so, throwing his fife (that he had been using to play Ariel's song) into the sea. But before he can approach Ariel, Ursula, disguised as a human girl named Vanessa, arrives and uses Ariel's voice to hypnotize Eric into believing she is the girl who saved his life, causing him to forget all about Ariel.

Eric almost marries Vanessa, but before the vows are completed, Ariel's friend Scuttle learns Vanessa's true identity and leads the same group of sea creatures that sang to Ariel and Eric on a mission to stop the wedding. During the chaos, the sea shell around Vanessa's neck containing Ariel's voice is smashed and the spell is broken. Ariel's voice is also restored, making Eric realize that Ariel is the girl he has been looking for. Before they can kiss, the sun sets and Ursula claims Ariel. Eric goes after them, diving into the sea to help Ariel. In the battle that follows, Eric climbs on to a ship and charges it towards Ursula just as she is about to destroy Ariel with the stolen trident, plunging the splintered prow into her belly.

Eric manages to reach the shore, and when he wakes, he sees Ariel, transformed back into a human, and the two embrace. The film ends with their wedding, at which Eric and Ariel exchange vows.

The prequel television series is set before the events of the 1989 film, and focuses almost entirely on Ariel. However, Eric makes very brief cameo appearances in three episodes.

The first cameo occurs in Season 1 episode "Thingamajigger". This episode implies that Eric plays a significant role in altering Ariel's perception of humans. Through dialogue, Ariel says that despite her fascination with human things, she is fearful of humans because of the stories she's been told since she was little. But when she witnesses Eric release a trapped dolphin from a net, she starts doubting the truth of those stories. To avoid messing up the film's story, Ariel does not see Eric's face, and Eric does not see Ariel at all.

In the Season 3 episode "Scuttle", Ariel and her friends stop a bunch of pirates from boarding a vessel, which turns out to be Eric's royal barge. Ariel does not see Eric at all, but Eric briefly glimpses Ariel from a distance, though Grimsby brushes it off as his imagination.

In a later Season 3 episode "Ariel's Treasures", Eric is seen briefly aboard a ship, from which a human item falls and is later collected by Ariel.

The Little Mermaid II: Return to the Sea

In the 2000 direct-to-video sequel, Eric is a supporting character. Although happily married to Ariel, the couple have a problem in protecting their daughter Melody from Ursula's sister, Morgana. Morgana blames everyone on board Eric's ship for killing Ursula although it was only Eric who skewered Ursula. Eric does not contribute to the plot, often playing a supporting role in helping Ariel or Melody. However, he was the one who convinced Ariel to temporarily transform into a Mermaid to help their daughter. In the end, he was reunited with Ariel and Melody as Humans and merfolk began celebrating together. This makes him the first and only supporting father of the Disney Princes in the franchise and this movie. Ariel's father was in the original however he was an antagonist of sorts.

In the 2007 Broadway musical adaptation of the Disney film, the role of Eric is originated by Sean Palmer and Drew Seeley is also playing the role. It is explained through dialogue that Eric's father has passed away, and it is Grimsby's duty to help Eric find a bride so he can return to the throne properly, despite Eric's affinity for exploring the seas.

Eric contributes singing vocals to the opening song "Fathoms Below", and performs two solo songs: "Her Voice", a song about Eric's obsession with Ariel's voice that had been written for the original film but discarded, and "One Step Closer", a new song where Eric helps Ariel express herself through dance. Eric also provides vocals in the quartet "If Only", where he expresses confusion over his attraction to Ariel, and his fear that if he finds the girl with the right voice, he might lose Ariel.

A new subplot in the stage musical is a singing competition where the eligible princesses in all the land are invited to sing for Eric. The princesses perform in the song "The Contest", which is set to the tune of Ariel's song "Part of Your World".

Eric is a prince on the surface land near Atlantica. All his life, he has been living in ignorance about the mysteries of the sea world.

Eric was saved by Ariel after his ship was wrecked in a storm. While he was unconscious, Ariel sang to him, and when he woke up, he recognized nothing about Ariel than her voice.

To be able to be with him, Ariel signed a contract with Ursula that allows her to become human for three days in exchange for her voice, and unless she makes the prince kiss her before sundown of the third day, she will belong to her forever.

Eric met Ariel at the beach where he was brought ashore, but did not recognize her because of her loss of voice. On the second night, he and Ariel were out on a little boat and almost kissed, until Flotsam and Jetsam interrupted them. The next morning, Ursula turned into a human girl called Vanessa and cast a spell on Eric to make him fall in love with her. However, Sora interferes with her plan and breaks Ursula's charm, thus giving Ariel her voice back and breaks Eric out of the spell. Eric, having recognized Ariel, confesses his love to her, but Ursula takes her back to the sea.

He then rescues Ariel and defeats Ursula with the help of Sora, Donald, and Goofy. Upon her defeat, Ariel reveals to Eric about her true identity, but he admits that it does not change how he feels. The romantic scene makes King Triton finally change his mind and let his daughter be with a human prince.

In the ending credits, Eric and Ariel, having finally become human, are seen getting married in a ceremony gathered with humans and merpeople.

Eric hostage by Flotsam and Jetsam 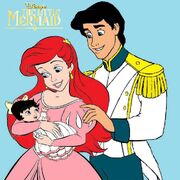