Disney has a number of Little Mermaid cartoon books. Both the full version of the story and very short versions. There are differences, mostly in Ariel's transformation, in the books compared to the movie and other books.

In one book, Ariel is changed into a human. Sebastian and Flounder watch as she changes and after the transformation. As she struggles for air and starts to drown, her friends realize that she can no longer live underwater. They then rush to her and take her to the surface. Ariel is shown full body as they are taking her up, with one of her knees blocking part of her waist and part of her bottom being shown. Once they are at the beach, Scuttle teaches her how to walk. Ariel is shown walking with a rock covering her waist. Eric then comes in and finds Ariel. Unlike the movie, she does not put on the sail. Instead Ariel, still half naked, hides behind a rock. She comes from behind the rock, wearing only her seashells. Eric ask her if they have met. She tries to answer, but she cannot speak.

In another book, Ariel becomes unconscious as she changes to a human. Both Sebastian and Flounder take her to the surface. When she is on the beach, Scuttle is already there. He helps wake Ariel up. As she starts to wake up, Scuttle grabs her feet and looks at them. He then lifts up her entire leg, trying to figure out what is different about her. Ariel looks at him and realizes that she has legs.

During another book, Sebastian is not there when Ariel changes into a human, only Flounder. Ariel does not feel any pain as she changes into a human. After Ursula takes her voice, Ariel looks down and sees her tail has changed into legs. Her transformation allows her to breathe underwater for a short time so she can make it to the surface. However, Ariel, thinking that she be able to breathe underwater like when she as a mermaid, doesn't know it. As she starts to sink, she lifts up one of her legs. She begin to sink deeper, however, she is too happy to notice. Flounder then goes to her, however she is still distracted. He tells her to hold on to him. Ariel looks at him, then does what he says. She grabs hold of him and he takes her out and away from Ursula's cave. As they are going, Ariel is still happily looking at her legs. She moves her legs and her feet as they go. Still underwater, he sets Ariel down on some rocks. Flounder stares at Ariel, surprised that she has legs as well. She lifts her leg as high as she can and wiggles her toes. As she does, the spell wears off. Ariel begins to choke, not understanding what is happening. She lies on the rocks as she tries to breathe. Flounder then comes to her. She looks up and points to the surface, thinking that she'll be better up there. Ariel grabs hold of him as they head for the surface. As they are going up, she still tries to breath. With no air left, Ariel falls unconscious. She lets go of Flounder and starts to sink deeper. He then stops and goes back to her. He then gets her and takes her to the surface. He takes her to the beach and lays her on the sand, away from the water. Scuttle then comes in and sees Flounder with Ariel. He tells Scuttle that he can't wake her up. Scuttle then grabs her foot and puts it next to his ear. He gets worried, thinking that she might not be alive. Ariel then coughs out water as she starts to breathe. Still naked, she sees her legs and becomes shocked.

During one book, neither Sebastian, Flounder or Skuttle were present during Ariel's transformation and when she is on the beach. They do however appear later on in the book. She was by herself as she changed into a human. Ursula takes her voice and her spell comes into affect. Ariel gets pulled down as her tail changes into her legs. As the transformation finishes, she starts panicing as she can no longer breathe underwater. She tries swiming up, but ends up going deeper. As part of the spell, Ariel is lift up and taken out of the cave. Still trying to breathe, she begins to lose conscious. As she nears the surface, the spell wears off. She then starts trying to swim up. She makes it, with her taking large breaths as she tries to stay afloat. With nothing to hold on to, she struggles and begins sinking underwater. As she starts drowning, she sees a large piece of wood. Holding her breath, she tries swimming and reaching for. As she is about to lose her breath, she reaches the wood. With it being strong enough to hold her, she brings herself up to breath and collapses on it. She becomes unconscious as the wood starts floating away. Later on, Ariel wakes up and finds her self on the shore of a beach. Her body is covered with nothing more than seaweed on her waist and her purple seashells. As she takes it off, she notices something different near her tail. She takes the seaweed off her waist and sees her foot. Ariel then lifts her leg out from the water and realizes that she is a human. As she tries to walk on her, she ends up losing her balance and falling back down. She then gets back up and tries walking on the beach. As she does, she hears someone coming. Ariel panics and falls behind some rocks. As she gets back up, she sees Eric and stares dearmly at him. He notices Ariel and ask if they have met. She tries to speak, but no words come out. Eric then goes to a naked Ariel and helps take her back to the castle.

In one, Ariel is by herself with Ursula once more and allows her voice to be taken. Unlike the film, where her transformation happens within the bubble, this books follows to the original story, in which Ursula gives Ariel a potion and tells her to drink it to become human. She drinks it, but bad for her, the changes happen immediatly. Ariel suddenly begins to feel a loss of breath as she starts to gain lungs. She looks at Ursula, to which she starts laughing. Ariel then swims as fast as she can to the surface. As she is going, her lungs are done and she is no longer able to breathe underwater. She holds her breath and tries to go faster. As she nears the surface, she stops in pain as her tail changes. Unlike the movie where it splits, her tail some how unwraps from her body and reveals her with legs and feet. Still not near the surface, Ariel struggles to reach it as she can no longer swim. Eventually, she cannot make it and becomes unconscious as she can no longer hold her breath. The next morning, Ariel finds herself on the beach, with no rememberance of how she got there.

In another book, as soon as she signs the contract Ursula's spell goes into affect. Ariel's voice is taken from her. A bubble then goes around her. After two flashes of light, the bubble pops and Ariel has legs. She tries to breathe and tries to swim to the surface but ends up sinking deeper. Sebastian and Flounder then rush to her. Ariel keeps trying to swim but only goes farther down. As she realizes that she is no longer able to breathe, she panics. Her friends then get her and take her out of the cave. Unlike other books or the movie, where they take Ariel immediately to the surface, her friends take her to the beach while underwater. As they are going, Ariel feels that she is running out of air. As they are half way there, Ariel is no longer able to hold breath. As she struggles for air, her friends get to the beach. She begins to lose consciousness as her friends realize that neither of them can put her on land. Scuttle then comes in and helps Ariel towards the shore. Once she gets there, Ariel lays back on the rocks, trying to catch her breath. As her friends tell Scuttle what happened, Ariel then collapses on the rock due to exhaustion. As her friends look at her worried, they hear someone coming and hide. Eric then comes in and sees Ariel naked and unconscious on the beach. He then picks her up and takes her back to the castle. Ariel then wakes up later on, laying down on a bed.

The Little Mermaid books are also in many other different language. This one is french. In this one, both Sebastian and Flounder try to convince Ariel not to make the deal. Regard less, she agrees and lets her voice be taken from her. Ariel tries to speak, but to her surprise, she does not say a word. She is struck by Ursula's potion and her tail splits into two legs. She falls unconscious due to the pain in the transformation and begins to drown after it is over. Sebastian and Flounder then take her to the surface. The translation for the story's page says: "But that's not all: a few choice words for their magical powers ... And she's equipped with two magnificent legs! Beautiful but, alas! impractical ... She is so accustomed to her fish tail that without her companions to help her swim, she would drown!"

In the comic book version, Ariel has her seashell bra on. She is lying on the beach, showing off her legs to Scuttle. Being excited about her legs, she starts to walk. As she walks, Ariel's hair covers her bottom. Meanwhile, her friends are talking about what they should do.

In one of the picture books, the story is told compeletly through Ariel's perspective with her being the narriator. She describes her transformation as being very painful. As her tail splits and changes, she says she tries screaming for help, but no one hears her. As the transformation finishes, she says her chest becomes heavier and heavier. Once the bubble pops, Ariel does not try swiming to the surface. Due to all the pain, Ariel allows herself to drown. The last thing she recalls is Ursula laughing as she becomes unconscious and drowns. Ariel later wakes up on the beach to her friends looking at her. Not remembering about her transformation, she sees her new legs and becomes amazed. She tries speaking to them, but she does not say a word. 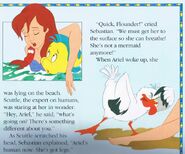 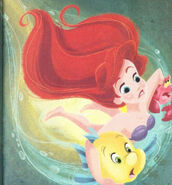 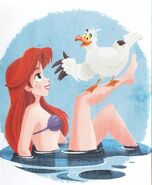 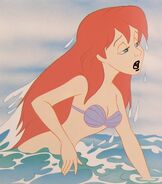 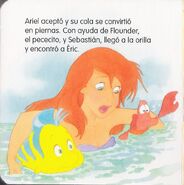 Add a photo to this gallery
Retrieved from "https://littlemermaid.fandom.com/wiki/Ariel%27s_Transformation_in_Kids_Books?oldid=10928"
Community content is available under CC-BY-SA unless otherwise noted.